The past year of 2019 had been fruitful for the earlier GFF HELPS Philippines’ Women’s Empowerment Program. It is aimed to benefit the women of Aklan, Philippines, in various objectives such as learning self-defense and computer software skills, initially started by previous GFF HELPS Philippines Representative & Volunteer, Willyn Carrascal and Leisle Betito, respectively. 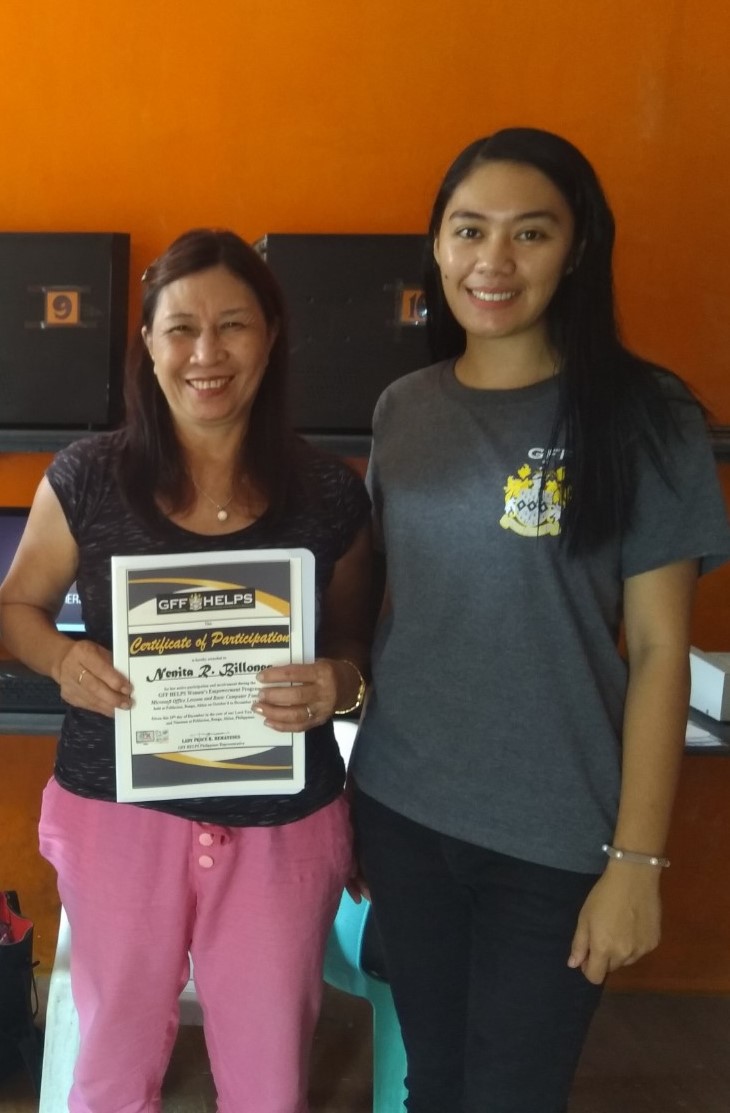 Under the Women’s Empowerment Program, GFF HELPS Philippines taught computer software skills to the women of Alternative Learning Students (ALS) in Banga, Aklan. One of them was Nenita, a grandmother in her sixties who pursued learning this new technology despite not having any experience of using a computer before. Her dedication shone through as she attended every week with great enthusiasm despite being late as she had to prepare breakfast for her grandchildren every morning. Though she was slower than her younger peers, especially in typing and using the mouse due to her rheumatism, she put in a lot of effort and tried her very best in all of the activities. Now, Nenita can help her grandchildren on their projects with her newly acquired knowledge of browsing the internet and using Microsoft applications.

Following the success of the previous Women’s Empowerment Program. GFF HELPS Philippines has also started conducting another basic computer skills program for the mothers from Banga. The participants in the second phase of this program were mothers who usually wait for long hours for their children outside of Banga Elementary School. These mothers would accompany their children to school and wait until it ends, as it would take them even longer to travel back and forth. This was an opportunity for these mothers to participate in our program.

The program comprises teaching the participants functions of a computer, Microsoft applications and navigating Internet browsers. Some of them have never used a computer before whilst some have forgotten how to use them. Not many people have access to a computer and could only use them through rental in computer shops, which was not a priority to these mothers. There is a total of 10 participants, their age ranging from 22 to 53 years old. These mothers do not only learn the basic computer skills, but they also gain self-confidence as they learn something new. Some of them have stopped working after having children and some have never had the chance to make their own resumes. The younger participants have expressed that their interests in applying for jobs have grown with their newly gained skills. Most of them shared that they would like to use this knowledge to help their children or grandchildren on school projects whenever they need to. We are delighted to see that these mothers are improving every session and really putting in the effort in learning as much as we are teaching.

As we educate these women, they will set as inspiration to their children and grandchildren, especially to young girls who would want to learn about computers. This year, April 23 marks ‘International Girls in ICT Day’. This is a day celebrating girls and women in ICT and encouraging more to study and pursue a career in the field of Information and Communication Technologies.

Although at this time of an outbreak we are uncertain when we will conclude the program, I am grateful that we have added self-assurance to these mothers when it comes to their soft and technical skills. With the constant efforts of the GFF HELPS as well as The Philippines team, we look forward to continuing this program with a high spirit to spark aspirations to other women.