The Indian Red Cross Society is a voluntary humanitarian organisation that aims to protect human life and health throughout India. Kalimpong Sub-divisional team has worked continuously for the welfare of the people under these seven principles: Humanity, Impartiality, Neutrality, Independence, Voluntary Service, Unity, and Universality.

Deorali is a hamlet in Bong Busty (village) 5 km away from the town of Kalimpong in India, comprising of about a hundred households. Most of the people that live in Deorali are dependent on agriculture and animal husbandry for their livelihood. The hamlet is surrounded by forest and some other hamlets without having proper medical facilities, leading to a lack of knowledge on first aid.

First aid knowledge can be a powerful tool in remote villages as it enables villagers to have the ability to assist people who get injured until professional help arrives. This knowledge is particularly powerful in Bong Busty because the local population are involved in hard physical labour and spend most of their time working outdoors. This, coupled with the lack knowledge about First aid, contribute to higher risks of getting injured and infected.

So, Nikita Rai (India GFF Representative) collaborated with Mr Ugen Lepcha (Centre In charge of “Sir Owen G Glenn Learning and Information Centre”, Bong Busty) and the Indian Red Cross Society to conduct a First Aid training course on the 9th February 2020 in SOGGL & I Centre Deorali, Bong Busty.  The training aimed to teach the villagers how to react safely and calmly during minor incidences and emergencies for themselves and others. 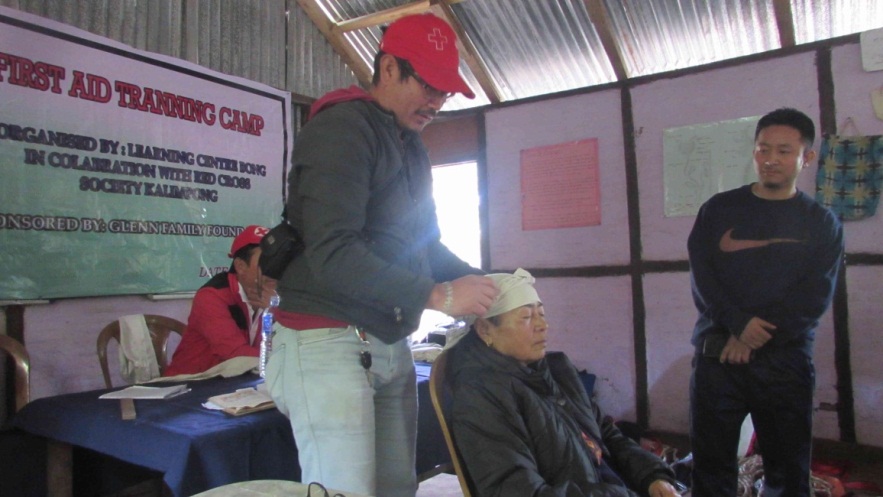 The topics covered in the training were:

The Red Cross team also provided medicine to those who were in need and checked the Blood Pressure level of participants who appeared unwell.

One of the participants Mrs Lepcha said that “The training was very helpful for them for their day to day lives because most of the time they work in the fields and it was obvious for them to face such circumstances where they would get injured”.

GFF will continue to support health education and fulfil its objective to grow sustainable communities with better healthcare facilities.  Also, we will remain committed to contributing to the United Nation’s Sustainable Development Goal: “Good Health and Well Being” through Medical Camps and trainings, which we plan to continue holding across project areas in the future.