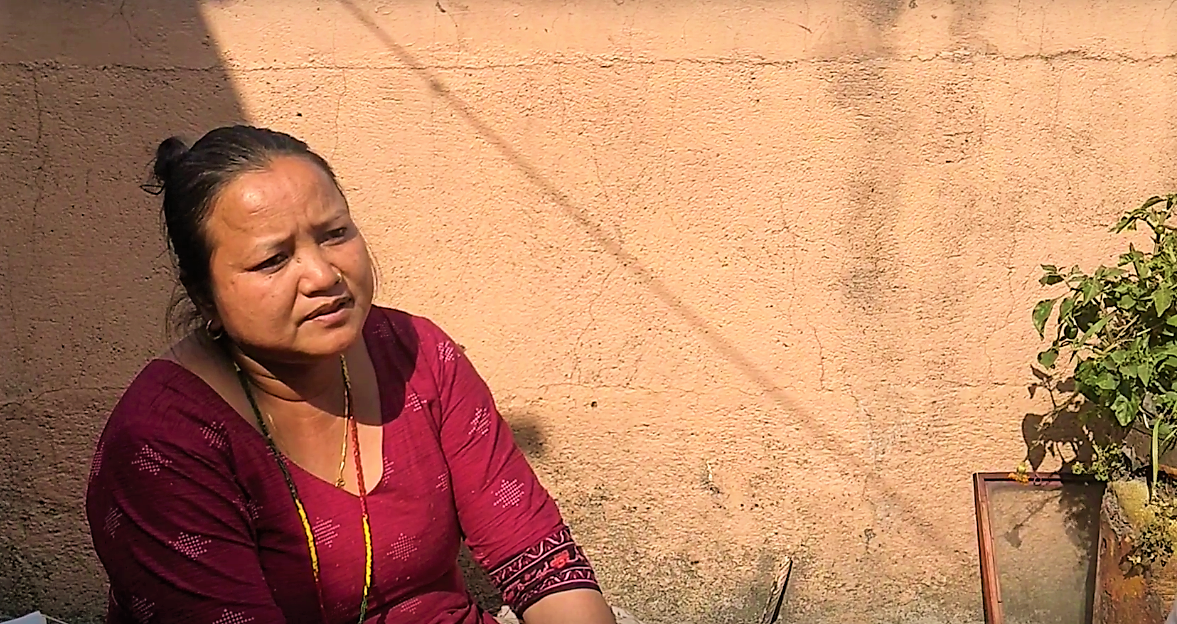 At the age of just 9, Maiti was travelling to Kathmandu with a group of older friends . She had run away from home to find work in the carpet factories. The work was unpaid, the only guarantee she had was of food and a bed at the factory, but she was happy, for the food and for her independence. Maiti was born into an impoverished family in the village of Dolahka, her father died while she was in the womb and his death hit the family hard.  The economic struggles meant she was unable to attend school in her village or the city and needed to work  to be able to eat.

“After I initially ran away” she says jokingly “my family used to come and take me back to the village. But I wasn’t happy there, so I would runaway again to come back to the factory”.

It would take her a full day walking to reach somewhere that she could get transport to Kathmandu. She continued in this way for years, eventually she got married in Kavre Village and had two daughters, who are now 27 and 24.

She became aware of Child Development Society’s Self Education and Empowerment Programme (SEEP) through her friends at the factory. Education was something she had wanted but wasn’t privileged enough to obtain, until this opportunity arose. She discussed some of the simple things she learned; things that most people would take for granted.

Before when I used to see someone reading  the newspaper, I used to wonder what they might be doing and when they talked about some events I wondered how they knew about it and now I know how that happens.

In the beginning she found having to attend the classes difficult, juggling work, being at home for her children and managing to fit 2 extra hours a day to attend literacy classes. Adding to that difficulty, with tears in her eyes she explains “Currently my husband is unable to work. He has diabetes and has a kind of paralysis.”

Her determination paid off; she has been the treasurer for her group for 9 years, a big responsibility that she successfully manages and that gives her pride. Going from having to ask her children to dial phone numbers for her because she couldn’t recognise the numbers to being the treasurer of her group is a remarkable accomplishment, and being witness to her development would make anyone feel humbled.

She now says to her children with a knowing smile “it’s easier to work than to study”.

SEEP has given her the opportunity to learn to read and write, which she had never had previously, as well as access to a group of women to share her experiences with, making her gain self confidence and feel empowered. Today, she believes that the course has given her the confidence to stand up to her boss at the factory to ensure she is getting a fair wage as well as giving her basic literacy skills that she uses in all facets of life.

“Sophie has been a GFF Helps Representative across both India and Nepal, working along side local NGO’s whose values and goals align with those of the Glenn Family Foundation. An economics major who is driven to continue working in the International Development Sector, her main focus while overseas has been women’s’ education groups and other types of community development and education.”