When men speak, women do not speak. When men speak, women cannot enter the room. Women would not step out of the house. They would send a man to purchase things that they would require from the nearby market. They would shudder even to utter a word. And by chance if they do, they were remarked ‘Pothee Baasyo!’ often mocking her for the audacity to speak when men are speaking. Any women in rural villages of Nepal would relate to this remark. The very remark which is embedded deep in their body language hid discreet chuckles and concealed glances. This reality was the story of women from the villages of Kavre, Nepal, a decade ago.

However, the reality today paints a different story due to Child Development Society’s (GFF Nepal’s partner organisation) Self-Employment Education Program (SEEP) in Kavre. This program intends to protect children and ensure their rights by empowering their mothers through economic, social and educational programs. The SEEP program is currently being conducted in Panchkhal Municipality and Godhagodhi Municipality of Kavre and Kailali district. It is a wonderful project where the women are empowered to educate themselves with classes every week. They are taught basic maths and literacy where they could read and write their names.  I had attended a couple of these classes in which I learnt that they were an escape for them from their household chores and abuse. Many shared stories of pain, abuse from husbands and children. Due to the pandemic, the classes were discontinued. With almost half the men population in the village and not having an escape which was otherwise possible through these classes was a challenge and were prone to household abuses.

The Covid-19 lockdown has also given us an unprecedented opportunity to rethink our potential and capabilities. Over the lockdown, restrictions on working in a large crowd have put many labourers out of work. According to an ILO (International Labour Organisation) report “Nearly 3.7 million workers are earning their livelihoods in the sectors deemed most at risk to experience a significant (medium to high) reduction in economic output as a result of the COVID-19 crisis. Also, nearly four in every five workers most vulnerable to disruption are in the construction, manufacturing and trade sector.”  This also led many labourers who had migrated from Kavre to Kathmandu for work had come back. So, Kavre is a village where most of the men are out of the village for work. So, when the COVID-19 pandemic was announced, there were a lot of men or young students returning to the village. They were jobless.

It was during this Catch 22 situation that the project of Soap Making was born. When pandemic was announced, one of the key measures to save oneself was from washing hands. And as the women in the classes had undergone soap making classes as part of the SEEP program, this was the best way they could escape from their household chores and earn a bit of money for themselves. It was also important to note that GFF Helps was trying to find spaces where women could come together to encourage and empower themselves despite the challenges. Kavre was a safe place as there were no corona patients during May and June. 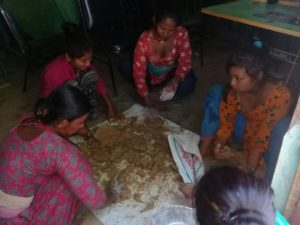 Meanwhile in Kathmandu, three women from Child Development Society office were laid off as they were in charge of Day Care Centre and the Centre was asked to close down.  As a result, the office could not pay these women. GFF Helps Nepal connected them and inquired if they could sell those soaps from Kavre in Kathmandu Valley, especially in Boudha area where they live. It was time to make ends meet. These three women would mark up the price of the soap and take the profit.

With the help of Child Development Society Project Officer – Pradeep Shrestha, we both ventured out to buy the materials for soap making amidst the lockdown. We were stopped by the police couple of times, but we managed to send two trucks of materials required for the soap. It was a moment of delight when the materials were sent to these villages amidst strict locked down.

The women started making soaps, and they made around 300 packets with three soaps each. Almost 30 packets were delivered to these three women. They could sell the soap successfully. It was a matter of research and development for GFF Helps Nepal and Child Development Society. We learned that the soaps could be sold very well in villages, but the quality was not high enough to be sold in an urban space like Boudha, Kathmandu.

The first batch of soaps had a cost price of NR 70 ($0.60 USD and sold in the Kathamndu – Boudha area for NR 100 ($0.85USD). The project was successful, and these three women could sell the soaps. But it was not sustainable as the women from CDS inferred people were only buying the soap because of recommendations, not because of quality. Hence, the second batch of soaps were made again and was contacted directly with the dealers in Bhaktapur which had a larger market for the soap.  Mrs Kharga, one of the heads of Kavre Women group, said, ‘We are really thankful to GFF Helps for providing us with an opportunity to earn and do something constructive. We are very encouraged to work more. As a women group; we feel we can do much more now!’

Please visit the GFF HELPS Nepal Facebook page to hear more about out projects in Nepal.