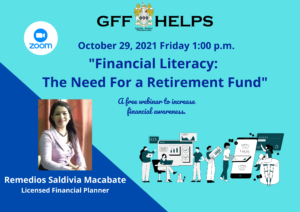 Financial Literacy webinar bannerThe GFF HELPS Philippines Team had successfully hosted and aired its fifth free webinar about Financial Literacy: The Need For A Retirement Fund which was beautifully presented by Mrs. Remedios Saldivia-Macabate, a Licensed Financial Planner whose one of the managers in an International Life Insurance Company in the Philippines. The webinar was held on 29th of October, Friday at 1 o’clock in the afternoon, via ZOOM application and it was attended by more than 20 individuals together with their families who came from different parts of Aklan Province, Philippines.

During and until the end of the webinar proper, different ideas from the speaker, participants and the PH Team were shared to everyone. During the open forum, financial-related questions were also thrown by the participants and were professionally answered by our beloved speaker. As quoted from Mrs. Macabate, “The best time to start saving and investing your hard-earned money is NOW.”

“Making good use of what they have.”

The GFF Sewing Machines have been a great support to the five (5) Sewing Project Women since they have been using those in sewing and marketing their outputs to make a living. The PH Team  has been receiving their monthly payments for these machines since August 2021 with the receipts given to them as proof of payments. They had given them those machines 30% less from the original price to continue their livelihood and make good use of their sewing skills since most of them became Licensed Dressmakers through our Sewing Project Phase 1. They are hoping to embark with Sewing Project Phase 2 by next year to make another group of Licensed Dressmakers through this skill-sharing project.

The Vegetable Garden Project beneficiaries from the different parts of Banga had finally able to plant almost all of the seeds that we had provided for them this summer year – for countless times, they were able to plant by batches considering the weather and all natural phenomenon – the planting and harvesting became continuous activity since most of the keen farmers were able to replant seeds out from the matured fruits that they had dried under the sun. The nutrients from the soil from the previous harvest was still there that’s why the replanting became possible due to the fertile soil/land. Since they have sold produce to their neighbors and local markets, they were able to save few money for their children’s schooling.

Joe FisherWebinar on “Financial Literacy: The Need for a Retirement Fund”12.04.2021